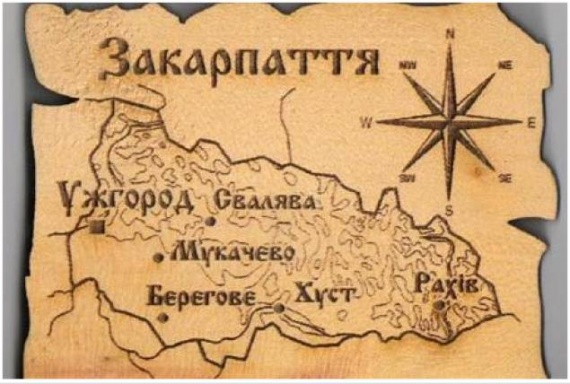 Transcarpathia (Carpathian Ukraine, Carpathian Ruthenia) – a historical and geographical region in the south-western part of Ukraine, in Central Europe, occupies the south side of the road of the Carpathians and the adjacent part of the lowlands, the situation in the basin. Tisa. Roughly coincides with the territory of modern Zakarpattia region.

Transcarpathia occupies 2.1% of the territory of Ukraine; most cargo space of Ukraine is great Bereznyi and Rakhov (43 thunderstorm days per year); snowiest place in Ukraine – Russian Wet (steady snow cover is here for 116 days a year); the highest mountain of Ukraine – Goverla (2061 m.); large mountain lake Synevir Ukraine (area of 7000 square meters at an altitude of 989 m); the most high-traffic artery Ukraine – avtoshosse on Yablunetskom Pass at an altitude of 931 m; the longest railway tunnel in Ukraine – Shcherbin-Sianky that is 908 m; Deep hospital in Ukraine Solotvino (at a depth of 300 m); the northernmost area of the world where tea is grown – Mountain Red Hill, near Mukachevo; the geographical center of continental Europe is near the village. Business Rahovsky area (48 ° 30 ‘. The latitude and 23 ° 23’. Longitude).

The longest river in Transcarpathia – Tisa. Its length in the range of 223 km edge. In addition to the Tisza river flow three. (Oh, Latoritsa, Borzhava). All rivers, creeks and streams in the region 9429, the lakes – 137, of which water bodies (lakes permanent) – 32. The biggest lake of Transcarpathia – Sinevir formed 10,000 years ago at the height of 989 m. The area of 7 hectares, with a depth of 27 m. The highest mountain waterfall – Vojvodina, and the highest – Trofanets.

Transcarpathia is rich in its history. In the region there are 1817 monuments of history, 496 – Archaeology, 48 -Iskusstvo. ancient sites of primitive man in Central and Eastern Europe is in the Queen Vinogradovskiy area and dates back to about 1 million. 100 thousand. years.

Extremely important for our area is the development of rural tourism. The attractiveness of this type of tourism is more accessible cost. It is advantageous for the peasants, who for a fee will be happy tourists comfortable they will be placed, provide a variety of services. In Transcarpathia has a long tradition, and the opportunity to engage in rural tourism on the basis of the rural house-year-round. Today, 95% of settlements edge of this rural settlements, which are home to 70% naselennya.V area there are about 600 most tourist routes, which provide the development of rural tourism, of which approximately 400 are certified. Carpathians again become popular in our country and abroad. For the first time in the New Year and Christmas holidays failed to place in the available material on the basis of all those wishing to relax. Thanks for RGANIZATION youth and family tours (sports, ecotourism, adventure, religious, conference tourism, educational, thematic, personal, etc.) on a Zakarpatti.Vikoristannya to accommodate eco-tourists existing tourist facilities, as well as private housing, activation of natural health factors at attractive landscapes, attractive historical and architectural objects, which is rich in the area. Inexpensive, effective and accessible tourist infrastructure of rural tourism in the Carpathians. In Transcarpathia is developing so-called elite recreation. In remote, but very colorful and unique locations in the region to create new tourist facilities that can develop in conjunction with the development of hunting, fishing and other related industries.

There is a tendency to intefikatsiyu tourism. In this regard, a good prospect is planned in the development of a ski holiday. There are unique and rare conditions for our mining and rural tourism. Today we all understand and that our tourists and holidaymakers are mainly located in the East. Provided that the West is almost built “filtration border” with all actively developing relations with the countries of the CIS and Russian Federatsieyu.Govoryachy primarily on domestic tourism, it should be noted on the special role and responsibility for the development of protected areas. Our biosphere reserves, national and regional landscape parks occupy more than 130,000 hectares. Every year they are visited by about 3 00000 people. Nevertheless, the development of tourism here while doing enough, and this should be a major focus of their activities. This practice operates worldwide. So it must be with us. An example is the work Synevyrska National Park. In the next two years, protected areas have become the main base for the development of walking and other areas turizmu.Perevagoyu rural tourism in the Carpathian region is that in Transcarpathia rich tourism potential, Transcarpathian region is recognized as the most promising recreational area (health resort) in Europe, where possible all year round (off-season ) services to tourists, the area is located at the junction of the 5 countries in the region have 8 castles, a large number of ancient church cathedrals and churches, monasteries and ancient cemeteries (Christian and Jewish), about 60% of the territory is covered with beautiful forests and mountains in the including alpine meadows (meadows) are unique nature reserves “Stuzhytsya”, “Carpathian Biosphere Reserve”, “Sinevir”, developed infrastructure of roads and railways, through Transcarpathia will be held in five transport corridor Trieste – Ljubljana – Budapest – Chop with an entire infrastructure: hotel, camping, shops, petrol stations, service stations – all you need to tourists. Prior to that corridor linked motels, apartments, and camps, as well as use the large number of mineral springs, wealth of folklore, carpet weaving, woodcarving, pottery, art, embroidery and other live very friendly lyudi.Asortiment rural tourism services, which provides the organization through its employees: provide excellent meals, excursions to choose from (sports, ecotourism, adventure, religious, conference tourism).

One of the most promising types of tourism in the Carpathians have transit tourism, which created roadside service highways, developed network of motels, bistros, conditions for cognitive trailering along major highways and tourist infrastructure in areas of the national network of international transport corridors and main highways . No less important is the specific border tourism (tourism neighbor). The features of cross-border tourism is to carry out border neutral territory Neighbourhood Days, Days of the region, Days of national reconciliation, which reinforce the established contacts. A new trend in the region has become a regional tourism (tourism all regions), ie travel vosmoma all countries of the Carpathians.
Most tourists in Transcarpathia choose short-term tourism, it can be trips with the whole family, a group of friends or co-workers, then, for example, a romantic getaway with a loved one, to witness the bright event, festival or just wander around the city, enjoying the new species and inaction. Many people choose and Transcarpathian weekend tourism (tourism weekend) when the duration of the trip does not exceed 3 days, and is an official public holiday calendar or weekends, and especially picky travelers to buy services – night hiking, allowing evaluation of other unique, indescribable atmosphere because Transcarpathian city throws off the vibrant city and turn on the lights lit myriad houses, streets, churches, and even night visits to castles and palaces Uzhgorodschini and Mukachevschiny.
In tourism taken to distinguish between the four seasons of tourism activity:

Hiking (trekking tourism, tripping, backpackers) is the most common type of sports tourism in the region, whose main purpose is to overcome a group of tourists to the area to route the departure place to the place of arrival for a specified period of time.